It’s a known fact that Polaris side-by-sides don’t mess around, so stick around and see what happens when this reputable company mixes business with pleasure.

While the Polaris Ranger and RZR remain two of the most innovative UTV models on the market, Polaris quickly recognized the need to bridge the gap between work and play so that industrious farmhands could transform into trailblazing off-road enthusiasts without having to switch vehicles. 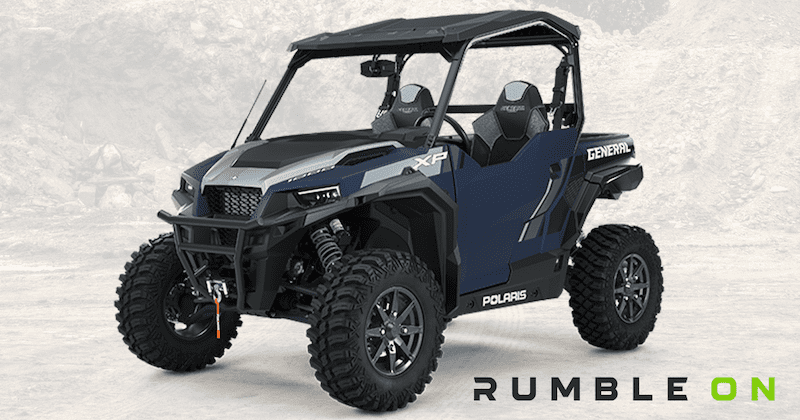 Trade an ATV online. RumbleOn makes it safe and simple.

Fed up with low-ballers? Get the ATV or dirt bike trade-in value you deserve from RumbleOn. We’ll have a no-obligation cash offer waiting for you in just 15 minutes!

A cross between the highly functional Ranger and the sportier RZR, the 2016 Polaris General 1000 is a commendable response to the growing sport utility demographic. It’s an incredibly user-friendly ride that inspires confidence thanks in large part to several fortifying attributes.

The first of these attributes lies in the General’s suspension, which is bolstered by FOX Podium 2.0 QS3 adjustable shocks with three distinct settings: soft, medium, and firm. Not to mention, when combined with its AWD capabilities, the General’s front (12.25”) and rear (13.2”) suspension travel makes even the most ominous trails seem like mere child’s play.

Moving on, the 999cc liquid-cooled, four-stroke twin is further accentuated by a continuously variable transmission (CVT), which can happily accommodate users who plan to haul and ride aggressively. (The General’s frame may be robust, folks, but its prowess remains entirely intact whether you’re muddin’ or haulin’, rest assured.)

In terms of amenities, the ‘Deluxe’ Polaris General side-by-side boasts many features that traditionally have to be installed aftermarket in other four-wheelers. The roof, front bumper, dumping box and winch—which can haul up to 600 and 4,500 pounds, respectively—all come standard on this machine. Additionally, the tachometer is connected to the General’s steering wheel, thus preserving gauge visibility whenever tilt steering is employed. Top it all off with a pair of upright, leather upholstered seats and two large doors that guard the cab against trail debris, and this sport UTV is a couple of turn signals away from being a full-fledged automobile.

Without a doubt, the Polaris General 1000 EPS was designed to encourage a sense of excitement in thrill-seekers, while also allowing the working man or woman a chance to tie up loose ends on the homestead.

We can tell you’re excited about trading in your ride, and you should be! At RumbleOn, we work hard to make the selling process smooth and efficient, so make haste before your dream wheels disappear. Trade for a Polaris General in our extensive online inventory right now and leave the hassles, hagglers, and everything in between at the dealer. Start your new adventure today.