What is the Best ATV Brand?

One thing’s for sure: these top-rated ATV brands are not messing around.

When it comes to notable brands within the powersports industry, I’ll bet all the household names come to mind almost immediately: Harley-Davidson, Indian, Triumph, Suzuki… You get the idea. But, motorcycles make up only a portion of the thrill-seeking machines that many of us have come to love and admire over the years; ATVs are a big part of that category, too.

Trade in ATVs with RumbleOn, and upgrade to the best off-road brands!

Have you been eyeing an ATV trade-in that can haul some serious mass? What about a bona fide mudslinger for the trails? Shop RumbleOn’s off-road selection today!

Now, I’m not here to shame anyone for not owning one of the best ATV brands on the market; I’m here to educate in the hopes that, one day, when you’re sullenly kicking the tires of your rickety ol’ four-wheeler, you’ll have the ammo you need to pull the trigger on a ride that’s equal parts work and play.

So, let’s get down to which ATV brand is best: 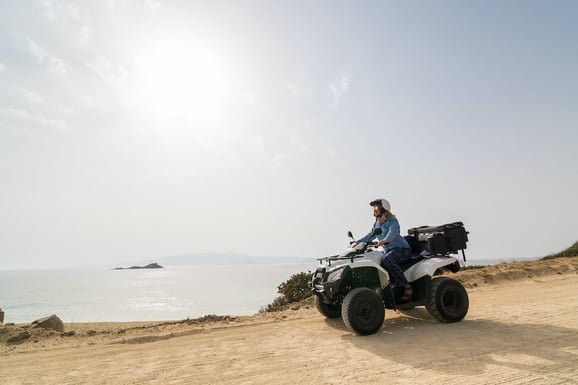 In 1968, Honda manufactured the first three-wheeled all-terrain vehicle, the Sperry-Rand Tricart. Shortly after, they introduced the ATC90 (All Terrain Cycle), which was originally intended for recreation, until farmers realized just how useful this three-wheeled machine could be. Decades later, Honda is still topping the charts as one of the best ATV brands. Deemed consistently reliable, their simple-yet-sharp line of ATVs feature “bomb-proof” transmissions and more than sufficient for farm work, as well as for a little fun off the beaten path. Because these machines lack some of the cutting-edge technology of other brands, there’s plenty of room for customization, and if you plan to frequent the track or trails with a Honda ATV, you’ll need it.

Personally, I’m all for Honda sticking to their “simple but gets the job done” mentality. If it ain’t broke, don’t fix it, right? If you’re convinced Honda is the ATV brand for you, check out any of these models: FourTrax Rincon, Rubicon, Forman, Rancher, and Recon.

For more than 60 years, Polaris has equipped recreationists, farmers, ranchers, and the like with machines that redefine hard work, performance, and adventure. Preston V.B., a contributor on GoRollick.com, holds that the brand has “made massive progress in developing all new machines in the past several years.” Notorious for being big-boned, Polaris’s all-terrain vehicle lineup is impressive not only for the 1000cc engines and 89 hp it boasts, but also for being one of the toughest ATV brands on the market. In fact, this brand is so tough and durable compared to the competition that the U.S. Army’s Special Operations Command consistently chooses Polaris ATVs.

Since first introducing the Trail Boss (ring any bells?) in 1985, Polaris has exceeded ATV enthusiasts’ expectations with the emergence of the Sportsman XP® 1000. According to the company, this monster of a machine was engineered with a 90-hp ProStar engine which “delivers premium performance that gives you the confidence to live outdoors on your terms.” I just got chills.

Boy, Yamaha has one heck of a resume compared to their competitors, don’t you agree? I’m not sure even Mr. Yamaha himself knew how far the possibilities could stretch when he first founded the company in 1887. At any rate, in addition to producing top-of-the-line pianos and reed organs, Yamaha has performed solidly in the ATV department for many years. Designed for trail riding and other strenuous outdoor activities, Yamaha ATVs are perfect for enthusiasts across the board, especially when you take into account the line’s 4WD capabilities and stopping power (four-wheel hydraulic disc brakes are a real lifesaver, or so I’ve heard).

One of the company’s most prestigious models, the Grizzly 700, is a constant favorite within the ATV community. The 2020 EPS (electronic power-steering) version is perfect for aggressive trail navigation, and the Ultramatic® transmission features a gated shifter, dual-range (Hi/Lo) drive, and reverse gear, making it one of the most advanced—and durable—CVT drive systems available. Yamaha’s Kodiak 700 model performs comparably to its Grizzly counterpart, it’s just a bit shorter and narrower.

For a ride that could drastically improve your trail-riding game and hauling capabilities, turn to none other than Can-Am. Beginning in 1942, Can-Am founder Joseph-Armand Bombardier had a vision for the L'Auto-Neige Bombardier Limitée (i.e. the Bombardier Snow Car Limited): durable, snow-plowing machines designed to conquer the harsh Canadian terrain like no other. Needless to say, he succeeded, and several years later in 1998, following the brand’s shift into motorcycles and all-terrain vehicles, BRP introduced a prototype of the Traxter (a utility ATV) which was named “ATV of the Year” by ATV Magazine. Now his vehicles—which range from snowmobiles all the way to ATVs and side-by-sides—are distributed in over 100 countries by more than 4,200 dealers and distributors.

Can-Am is known widely for “combining maximum power, handling, and traction.” Advanced technology features include TRAIL ACTIV mode, which maximizes speed in 4WD; EPS; IRS (independent rear suspension); and, Smart-Lok, which progressively ‘engages’ the front end, resulting in smoother steering and predictable response. With 195 horsepower, the Can-Am Maverick X3 is a shining example of the combination of such technology.

To conclude our discussion on the best ATV brands, I present to you none other than Kawasaki, another prolific brand in powersports. Known for its notorious line of Ninja motorcycles, Kawasaki began producing all-terrain vehicles in 1981, including the first 400cc ATV engine, in ‘93. Since then, they’ve staked their claim in the Youth and Sport Utility ATV categories, which includes the KFX® series, as well as a small but powerful line of all-in-one vehicles ominously dubbed the BRUTE FORCE® series. Designed for those seeking utility and recreation simultaneously, Kawasaki’s BRUTE FORCE® ATVs feature integrated storage and towing capabilities, in addition to 2WD, 2WD/4WD, and EPS. One thing’s for sure: these ATVs are not to be trifled with.

Voted #1 on ATV.com’s ‘User Rating’ list, the 2019 Kawasaki KFX® 90, received five out of five stars in the following categories: Performance, Quality & Reliability, Ride & Comfort, and Value. Even though the brand is most frequented by the youngster population, I’d highly recommend test-driving any one of their KFX® models if you’re the thrill-seeking type!

Is there a brand or top-rated ATV missing from this lineup that deserves recognition? Let me know in a comment!

Craving an upgrade? Trade four-wheelers and more with RumbleOn today.

You don’t have to be an ATV enthusiast to appreciate the greatness of the best ATV brands. If you’re all about life off the beaten path, shop RumbleOn’s extensive inventory of used four-wheelers and dirt bikes for the ATV or dirt bike trade-in you’ve been dreaming of. We make it easy to trade in dirt bikes, ATVs, and other off-road vehicles, and you never have set foot in a dealership! Trade an ATV online from anywhere and get the upgrade you deserve.