Hunting season is upon us. Take a look at a few of the best hunting four-wheelers that are guaranteed to help you up your game.

There’s nothing like the smell of wet grass, burning leaves, and a cool 17-degree wind chill to remind you that winter is coming and hunting season has officially begun. And what better way to ring in the chilliest of seasons than with a four-wheeler equipped to haul some serious game. 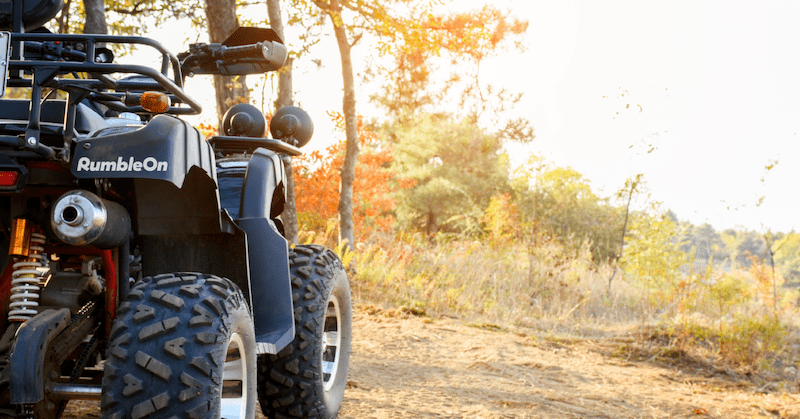 Buy a used four-wheeler for sale from RumbleOn in time for hunting season!

Now is the best time to buy used ATVs, UTVs, and other powersports from RumbleOn. Our selection is guaranteed to help you navigate the trails with confidence this season. Buy now!

The results are in, folks, and I’ve determined that there are at least three utility ATVs and UTVs that you should set your sights on this hunting season. But, don’t be fooled: these machines have just as much recreational appeal as they do workhorse grit. All have praiseworthy handling, commendable storage space, and are equipped to handle tough terrain with differential lock capabilities and selectable 4X4 and 4X2 drivetrains.

Starting with the smallest engine displacement to the largest, first up is the...

One thing’s for sure: if your ATV is sporting the name ‘Polaris,’ then you know you’ve got one heck of a ride in tow. Sure, the Sportsman® 570 doesn’t look like much in terms of its chassis or 567cc engine displacement, but looks can be deceiving. Boasting suspension calibration that’s comparable to its big bore brothers, the Sportsman® can tow up to 1,500 pounds (that’s two fully grown elk, or five mule deer if you’re looking for the best ATV for deer hunting) and has a total rack capacity of 280 pounds—only 80 pounds shy of the much larger Sportsman® XP 1000. I’m already convinced this could be the best ATV for hunting.

Additionally, it’s one-of-a-kind ProStar engine (developed specifically for Polaris machines) delivers smooth and quiet power at higher RPMs, while the automatic PVT shaft drive transmission is located conveniently near the driver’s right arm for easy shifting during abrupt terrain changes. All in all, I’d say you’d be pretty satisfied with this ride when push comes to shove on the trails.

Many people are partial to Arctic Cat’s line of off-roading vehicles, and the 2013 Arctic Cat Prowler 700 HDX utility UTV is no exception. Equipped to handle just about any terrain, the Prowler 700 HDX is an honest answer to the hunter’s call for a reliable four-wheeler that can tow some hefty game in extreme conditions. To start, its single-cylinder, liquid-cooled engine sits at 695cc, which is plenty respectable if you’re searching for the best side-by-side UTV for hunting; anything less than that, and towing capacity starts to suffer. Speaking of which, have I mentioned that the Prowler has a payload capacity of 1,500 pounds and can tow up to 2,000 pounds? And if you’re one of my taller guys or gals, there’s plenty of legroom to tow you around, too!

Furthermore, the Pioneer’s load requirement can easily be adjusted by adding air pressure to the Fox FLOAT® Air chamber (this is where the ‘HDX’ designation comes from). Bottom line: the 2013 Arctic Cat Prowler 700 HDX has earned its keep as the best UTV for hunting.

Boasting a powerful albeit quiet 999cc single-cylinder, 4-stroke engine, the 2017 Honda Pioneer 1000 LE is anything but unassuming. A beauty to behold, the Pioneer’s competitive engine performance and handling put it up there with class leaders like the Polaris Ranger, and rightfully so. Over 9 feet in length, this robust machine can carry up to three passengers once the cargo box has been transformed into a pair of high-mounted seats complete with seat belts, doors, and a roll cage. It also boasts an 80.3-inch wheelbase and 10.6 inches of adjustable preload in the front, as well as 2,000 pounds of towing capacity—hills or high water, the Pioneer 1000 is one tough S.O.B.

Most utility vehicles aren’t cut out for back-to-back trail differentials or tight spaces, but if you don’t mind a little challenge, the 2017 Honda Pioneer 1000 LE is an excellent hunter’s companion.

There you have it, folks! The Top 3 Best Hunting ATVs and UTVs. Of course, this is only a small sampling, so feel free to leave a comment with your top picks!

Buy or trade an ATV online with RumbleOn!

Whether you want to buy the best ATV or the best side-by-side UTV in its class, we’re here to help. RumbleOn has tons of used powersports in our inventory, and that includes some of the leading ATVs and UTVs from years past. You can buy or trade four-wheelers all online and on your own time with RumbleOn; that’s what I did when I decided to trade my ATV. It only takes 15 minutes for a trained specialist to calculate your trade-in value, which you can choose to keep as cash or put towards the purchase of a new ride! Get your ATV trade-in value today!