What's the Difference Between Honda's CRF250L and CRF250L Rally?

When it comes to adventure, what's your preferred scenery? Is it out on the trail? Does it include scenic mountain views or clusters of skyscrapers? Whatever the case, Honda’s CRF250L motorcycle lineup gladly accepts the challenge. 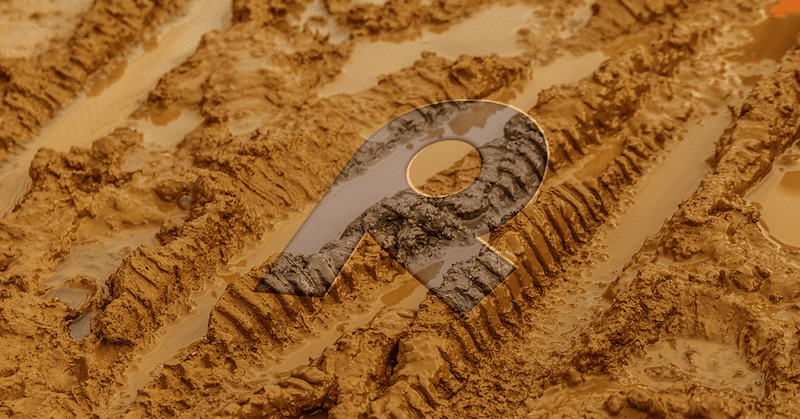 Shop used dirt bikes and other Powersports the easy way with RumbleOn!

A quick peek at our selection of off-roading vehicles and you’ll be on your way to the adventure-seeker you’ve been dreaming of within minutes. Buy a used dirt bike or ATV today!

Honda, a company whose reputation is consistent with top brands in the industry, set out to design an adventure seeker that could handle the trails as effortlessly as it could the pavement; thus, the CRF performance lineup was born. These street-legal dirt bikes empower riders with on-road and off-road capabilities, making the transition between day job and weekend jaunt a seamless one.

Whether you fancy a journey through the urban jungle or a rendezvous in the dirt, the 2017 CRF250L and CRF250L Rally offer sufficient thrills. In fact, these dual-sport bikes have a great deal in common, so you really can’t go wrong with either.

Still, in the spirit of competition, I set out to determine which bike is the better off-roading companion, which Honda CRF250 price lists the best benefit, and which can handle pavement with equal parts prudence and prowess. Here’s what I found:

The heart and soul of these CRFs lie in their fuel-injected, single-cylinder engines, complete with electric starters, counterbalance, and double-overhead cams. Both bikes provide smooth, consistent 24.4 horsepower, plenty of low- and mid-range torque, as well as improved throttle response compared to earlier CRF models. Not to mention, they bring bursts of excitement and admirable fuel economy to the daily commute.

To determine the difference between CRF250L and Rally rides, however, we have a few more details to consider. For instance, while both bikes feature the same upgraded 250cc engine and ABS option, the Rally’s increased seat height (+0.8 in.), suspension, and ground clearance make it a more suitable off-road choice, and the longer wheelbase (slight but still existent) makes it a bit more directionally stable.

Additionally, the Rally has a larger fuel tank, updated Dakar-style bodywork, better wind protection and visibility with its rally-style windscreen, hand guards, and a full wrap-around skid plate that defends against trail debris. It also boasts blended, frame-mounted fairings and asymmetric LED headlights, in addition to a larger front brake for more stopping power on pavement and a set of wide serrated dirt bike pegs for traction and leverage during stand-up riding. This bike is a born thrill-seeker, for sure. 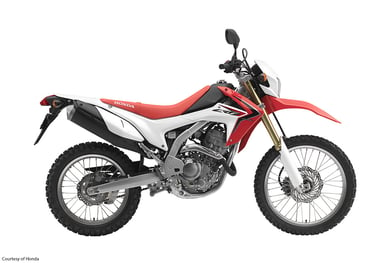 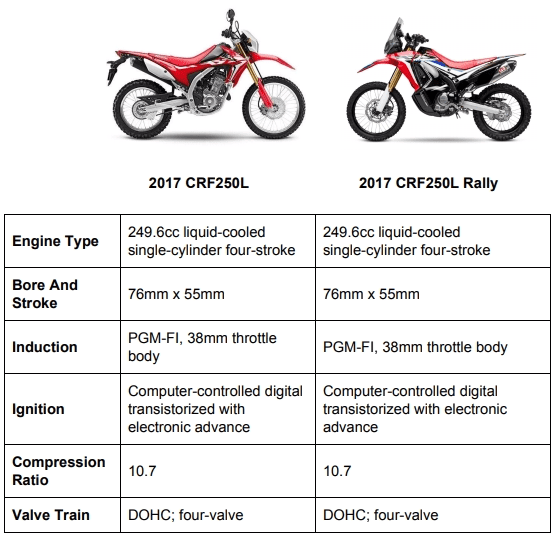 Brass tacks, I’d say the CRF250L Rally is the better off-roading option considering the upgrades Honda made to its frame and suspension (though I wouldn’t recommend taking this puppy out for aggressive trail rides because the ABS can be meddlesome and the suspension isn’t quite where it needs to be). The standard CRF250L, on the other hand, performs better on pavement and is the more affordable adventure bike of the two. Sure, it may be 24 pounds lighter than its Rally brethren, but this bodes well for the standard in terms of ‘zippiness’ and passing power.

Looking to buy a used ATV or dirt bike to quench your thirst for adventure?

Are you a trailblazer by nature? Does life off the beaten path excite you? Did you know you can shop used ATVs and other off-road vehicles online for a ride that suits your thrill-seeker genes? RumbleOn offers the widest selection of used powersports, plus a Money Back Guarantee, and door-to-door shipping! It doesn’t matter if you want to buy used ATVs, motorcycles, dirt bikes, or side-by-sides—we have it all. Start your off-roading journey today with your next adventure ride from RumbleOn!