The Dirt Bike Dictionary: Lingo to Navigate the Track (Part One)

New to dirt bike riding? How about a quick refresh of these common motocross terms?

Anyone who’s passionate about riding dirt bikes knows the lingo by heart. But, if you’ve recently caught the off-roading bug, it’s possible you still have a few things to learn about motocross track terms and anything to do with life behind handlebars. 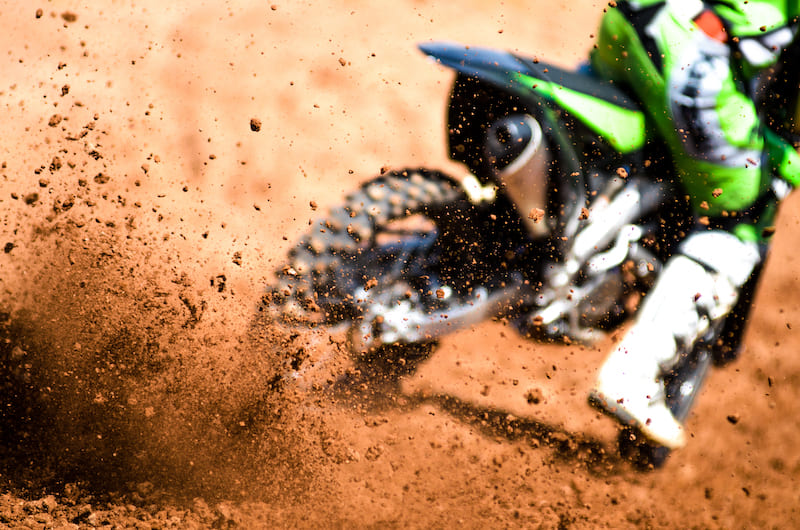 While I might be inching further and further away from wheelies and bar-hops, some things will stay with me like a severe case of monkeybutt (looky there, four track terms in one sentence). Whether you’re new to the track or practically live on it, a dirt bike dictionary is a must-have for competitors and recreationalists alike.

Since 1924, motocross has introduced us to some of the best two-wheeling talent around, and their mental game is just as strong as their physical. I’m sure most of them would agree that knowing what each of the motocross terms means is just as important as bringing them to life on the track. So, let’s crack into it.

Here is Part One of the motocross track terms (Numbers through E) every current and aspiring MX biker should know (if I missed any in this first set, let me know in a comment!):

Stay tuned for parts two and three of this dictionary coming soon!

Is the dirt track calling your name? A dirt bike trade-in might be in your future.

Sometimes, life gets a little dull, and when that happens, it’s time to get the blood pumping again. Right now, trade four-wheelers, motorcycles, ATVs, and more for a dirt bike that fits your unique riding style. I never thought I’d want to trade an ATV for a dirt bike, but once I did, I never looked back (a FREE ATV trade-in value was just too hard to pass up!). Plus, if I ever start craving four wheels again I can easily trade in dirt bikes for a used ATV using RumbleOn. Trade in ATVs, dirt bikes, and more today for a ride that shakes things up a bit.

The amount of time spent in the air when jumping.

American Motorcycle Association. The governing body for motocross in the U.S.A.

A symptom of gripping the bar too hard, causing the forearm muscles to get hard, restricting blood flow.

A neutral position on the bike that provides ideal balance and maximum range of motion to negotiate the terrain.

Loose, round rocks about the size of a baby’s head. Tricky riding surface.

A slow rider “marking” the back of the pack.

A surface that faces away from the rider. Landing on and using backsides is great for keeping speed.

Jumped off the bike (to avoid a nasty crash).

While airborne, rider keeps both hands on the grips and extends legs straight out between arms and over handlebars.

Large banked corner on a track. Designed to help a rider turn much faster.

To charge at the ‘whoops’ and skim across the top of them.

When a rider passes another rider in a corner by moving to the inside and front, forcing the leading rider to slow down and move out of their line; sometimes contact is made (i.e. ‘stuffing.’).

A corner that used to have a bank in it but that bank has been moved and destroyed by riders.

When so many riders run the same line, the track starts to look blue from all the rubber off the tires.

A large jump that gives riders serious airtime; often occurs right before the finish line with a landing.

To use all of the bike’s suspension. Can be heard with a metallic clank.

A noise that can be used to describe actions, end a conversation, or for storytelling purposes. Comes from the sound a 2-stroke engine makes at high speeds. Brraaaap!

This tactic involves applying the brakes early, typically in the corner, in order to cause a trailing rider to lose momentum. The concept is similar to a block pass.

Small bumps created by riders from continually braking, usually before corners. As the race continues, these bumps become bigger and require more control over them.

When a rider moves one of his legs over the fuel tank to the opposite side of the bike while airborne. In a No-Footed Can-Can, both legs are extended away from the bike.

To aggressively ride a turn with high traction and speed, without any tire slippage. Also sometimes referred to as holding the inside line.

When the bike’s front wheel lands on the back of the landing and the rear wheel on the front of the landing; basically, the rider comes up short on a jump. The motor and frame hit the dirt because of the impact.

Used to describe a bike that is a couple of years old and not well maintained.

While airborne, laying the motorcycle flat while bringing the back of the bike around.

The area in which a rider can move on the bike. Often referring to the bars and steering area, but also the space between the bars and the seat.

When the front and rear wheel of the bike are not in the same rut.

When everything on a bike is running smoothly, the rider is said to be “dialed in.”

A bike that is ragged out and used for play purposes.

Did not finish. This designation appears next to a rider’s name after a race.

Two separate jumps with a gap between them, and the rider flies over the gap: jump, gap, land.

Two trails that run parallel to each other (also called tractor trail or Jeep trail).

A whooped out ski type jump. Looks like a dragons back.

Dropping into a runway towards, for example, a jump.

Used to describe when a rider goes over the handlebars. In this instance, the bike is pitched forward, end over end.

An intense style of riding done in an off-road setting.