Craving a few more motocross terms before your next trip to the track?

You didn’t think the Dirt Bike Dictionary ended at E, did you? Let me assure you, beginners, there’s plenty more to learn, so gear up and get ready. 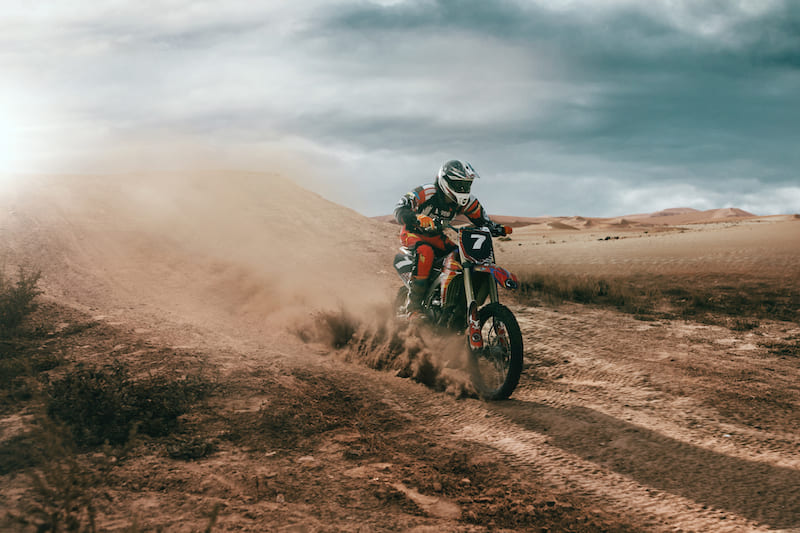 As I mentioned before, a dirt bike dictionary is a must-have for anyone interested in pursuing track life. Knowing the lingo sets you up for better communication, and if you want to earn the respect of fellow riders, I’d recommend giving these motocross terms a thorough look-through before you open that throttle. Trust me, even a little knowledge goes a long way in this sport.

Without further ado, here is Part Two of the motocross terms, with Part Three coming soon. As always, leave a comment if you think I need to supplement this next set of terms, and don’t forget to check out Part One of our Dirt Bike Dictionary for even more terms.

Stay tuned for part three of this dictionary coming soon!

Need to sell a dirt bike for cash the fast and easy way? We have you covered.

It’s never been easier to sell a dirt birt online, until now. Not to mention, we’ll take that old four-wheeler off your hands, too! RumbleOn wants your ride, plain and simple, and we’ve simplified the process by giving you the technology to sell an ATV online. When I needed to sell an ATV for cash, I looked for places that would help me sell four-wheelers without the hassle of going to the dealership. Once I discovered RumbleOn, the rest was history! Not only did I sell my ATV on my own terms, they also picked up my old vehicle for FREE. Bottom line: Rumble is THE best way to sell an ATV fast and for the cash you deserve. Get started today!

The frontside of a jump.

When the rider’s technique is as smooth as possible on his or her bike.

When a rider jumps too far and lands on flat ground; they missed the backside.

Riding smooth and just having a good time.

When a rider’s body resembles a ‘W,’ i.e. hands are on the bars, legs are bent and outstretched behind them. Usually a precursor to a crash.

A timed competition that tests the rider’s ability to perform aerial maneuvers.

Any surface that faces towards the rider (opposite of ‘backside’). You do NOT want to land on the frontside during a race.

The distance horizontally between two points that a rider jumps.

A natural or man-made obstacle that dips down and forces the bike’s suspension to compress, or bottom, severely.

A person who has no throttle control but instead relies on dumb luck to avoid catastrophe on their dirt bike; a.k.a. a "Gorilla gripper.”

When a racer slides in a corner and suddenly gets traction, causing the bike to flip over.

A jump with the landing at a different angle from the takeoff. The rider must turn in the air.

To holeshot means you’ve reached the very first corner of the race after the starting gate drops.

When the bike is riding you (imagine a bucking horse). Happens most often in the whoops.

“In the weeds” means to ride off the track. Oftentimes, riders are forced off by competitors.

A jump that sends the rider high rather than far. If the rear suspension of the bike rebounds too forcefully, the bike will be forced up on its front wheel, and the rider can be bucked off.

To swing the rear tire sideways while keeping the front wheel on the ground.

One full ride around the track.

A lapper is someone in a race who is a full lap behind the leaders. Can happen even to skilled riders who take too long getting up after a fall.

A path in the track a rider follows during a race. They can choose the fastest ‘line,’ or the safest.

The takeoff surface of a jump.

Perfectly aerated soil known for its fluffy consistency, usually made of sand/clay mixture. The ideal riding surface for dirt bikes.

When the front end of the bike goes into an uncontrolled wheelie and back over itself. Usually happens when the rider lets the front end get too high over a jump and then lands vertically.

Sand, dust, or fine gravel on top of a hard surface. Very slippery!

After riding miles upon miles of track or trails, your rear-end starts to feel the burn (literally).

‘MX’ for short. Motocross is derived from the combining of ‘motorcycle’ and cross country racing. MX involves a closed course with varying lengths of natural and man-made tracks.

What happens when a bike slows abruptly in mud, throwing the rider off into mush.

Want more dirt bike terms and motocross definitions? Check out Part One of our dictionary here, and stay tuned for part three coming up!