The Off Road Motorcycle Buyers' Guide

Off-Road Motorcycles: What you need to consider before the purchase

Jumping into any big purchase should never be done without some research first, right? Unless you’re Bill Gates or an equally financially established multi-billionaire, odds are you don’t have as much pocket change to throw around for the toys you want. This is especially true if you’re wandering into a hobby you  aren’t familiar with. You never want to walk into something totally blind, because that means there’s far more room for error. And when you buy a motorcycle, there’s a variety of different things to consider. But if you’re switching from one riding style to another, well, things get a little more complicated.

Sell an ATV or trade in dirt bikes the easy way.

Need fast cash? Want to trade for an off-road motorcycle? Trade in or sell with your cash offer!

It’s somewhat like claiming that you know how all ice cream tastes because you’ve eaten chocolate ice cream before. There’s coffee flavored, Neapolitan, mint chocolate chip...and now I’m hungry. The point is that just because you have an idea of considerations to keep in mind before buying a traditional bike, doesn’t mean you also know all the points to consider when you buy an off-road motorcycle. In case it wasn’t already apparent, here’s where my transition happens!

Below are some considerations to keep in mind when you buy an off-road or motocross bike.

You know how much you love your Harley or Indian, and you’re convinced there’s no other brand that will meet your needs? Well, that can tend to transfer to off-road bikes, too. This is a bike sector that’s becoming increasingly more popular, and that’s evident by the number of brands you can choose from. Whether it’s established brands like Suzuki or Honda, and more recently established names like KTM, your brand choice will matter.

Because off-road bikes have way fewer bells and whistles than traditional motorcycles, the brands have to find other ways to separate their bike from the competition. Some brands create lighter bikes that are easy to navigate, while others focus on a large gas tank or an electric start. Make a list of all the things you feel you need in your bike, and you’ll find your matching brands from there!

While off-road bikes are pretty darn simplistic, that doesn’t mean that they’re invincible. You might actually find that an off-road ride or dirt bike option needs more fixing, only because of the terrain it rides on. When your bike rides on smooth pavement without much conflict in the way, there are not as many opportunities for it to run into a problem. But when your ride is used to traveling over rocks, rough trails, and through mud, there’s more opportunity for things to go wrong.

So consider how involved you want to be with your bike, as some brands and models will involve more maintenance than others. If you’re someone that really wants to learn the ropes and become “one with the bike”, you have more doors open on potential options. But if you’re specifically looking for something that doesn’t require as much work, it will limit yourself to different brands and models that might not tick your other boxes.

Where do you want to take it to ride?

Do you see yourself strictly looking to off-road into the wilderness, or do you also want the option to ride on the road? This will impact what kind of model you’ll want to be looking for. If you’re looking to ride trails in the woods, you’re going to want a dirt-bike that has solid treads on it to be able to keep a grip on the terrain. However, if you also want to take it on the road, then the dirt-bike isn’t the right choice, because most aren’t even street legal.

If you want something that’s capable of off-road riding, but you can still ride back home on the streets, you might want to look more toward a dual-sport or adventure bike. These rides won’t be as lightweight and nimble as the dirt-bike, but it’s simply a matter of being realistic with what kind of riding adventures you want to go on.

Find the one that is just right: 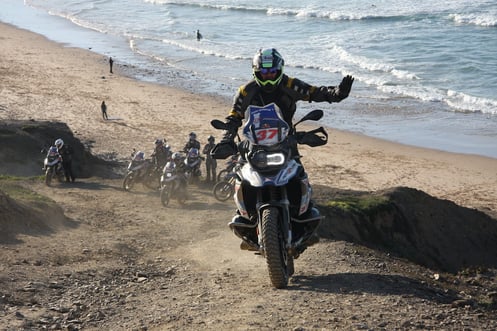 Believe it or not, off-road motorcycles come in differently sized rides, just like traditional bikes. Sure, the variation isn’t as large as some other bikes, but it stills exists and needs to be considered. You’ll want to find a model that you’ll be comfortable on, because not only will that impact how easy it is for you to ride, but it will also impact how fun it is. You’ll already have to adapt to riding on, well, not a road, so you’ll want to make all other transitions as easy as possible.

When it comes to picking the right size, you’ll want to consider your height, your weight, and your experience level. Those with experience under their belt can go with heavier options because they’ve already adjusted to riding. The best test to see if a bike is too big or small for your height is to sit forward and get your feet on the ground. If your full foot is touching the ground, it’s too small. If you can hardly even make contact with the ground, it’s too big. You’re looking more for it to balance on your tiptoes, and that’s when you’ll know it’s just right. 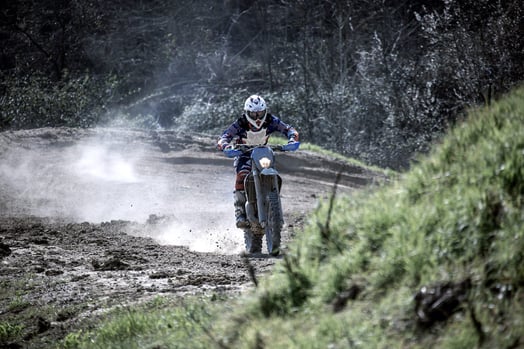 While four-stroke bikes are becoming more and more popular (and dominating the industry) that doesn’t mean that two-stroke isn’t an option for you. A two-stroke machine will typically be a bit cheaper, and it will involve less maintenance to keep it in running order. So if you’re one of the people that would rather not deal with the hassle of constantly having to fix up your ride, you might want to go with a two-stroke.

Four-stroke models are very powerful, and they’re an awesome choice for beginner riders because they tend to be easier to deal with. The engines typically won’t give out as easily, but they can involve a bit more maintenance.

This should really be one of your first considerations, and while it may appear as an obvious point, that doesn’t make it any less important. You’ll want to decide a price you’re comfortable with and go from there. There’s nothing worse than falling in love with a ride, only for it to be way out of your price range. That’s a feeling of defeat I won’t wish on anyone, so try and makes things easier on yourself.

Even the best off road motorcycle tends to be much cheaper than other traditional motorcycles, and that’s because they just don’t come with as much. But that doesn’t mean that pricey options aren’t out there, and if you have a bottomless wallet, they’re considerations.

While the buying process can be stressful for a lot of people, it doesn’t have to be. RumbleOn will allow you to filter out all your search to get as specific as you want, all to make the process that much easier. Adventure is waiting for you, and it’s as simple as find, buy, and wait for it to arrive at your door!

Sell or trade for an off-road motorcycle the easy way, get your free cash offer.

Rider. Writer. Harley life-r. Follow my coverage of everything from tips for motorcycle riders, to motorcycle humor, and everything else to do with living life on two wheels.