If you’ve brushed up on your dirt bike dictionary terms, then you know Motocross involves a dirt bike (duh), enormous dirt mounds, and a bleeding-heart lover of flying who's willing and ready to test the limits of physics. 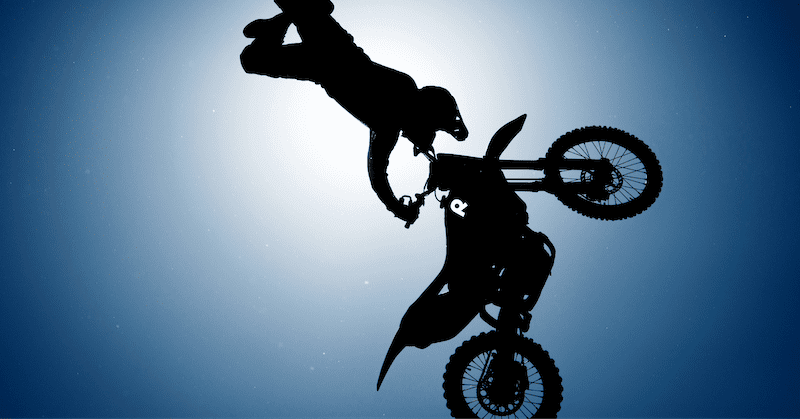 Sell a dirt bike fast with RumbleOn! No hassles or headaches allowed!

Is it time to upgrade your ride, but you’ve been dragging your heels? Sell a dirt bike online and get a free cash offer for your vehicle. We’ll fill out all the paperwork and pick it up for FREE!

In order to test these limits and figure out how to get air on a bike, you need some serious tricks up your jersey sleeve, and events like Red Bull X-Fighters, NIGHT of the JUMPs, and the X Games provide this opportunity. Here, fans eagerly watch as prominent freestyle Motocross (FMX) riders pay homage to legends like “Mad” Mike Jones, Travis Pastrana, and Brian Deegan (Mulisha Twist, anyone?).

So, without further ado, here are my Top Seven picks for the sickest dirt bike tricks.

It’s a mouthful alright. This trick relies heavily on footwork and control of your bike. Then again, how much control do you really have when you're completely airborne? Leave these moves to the professionals, folks.

If that doesn’t get your heart pounding, I don’t know what will. To be honest, I cringe thinking about the number of fails riders endure to perfect this trick. So, I just won’t think about it.

So far, I'm just as interested in meeting the people who have named these tricks as I am in the people who are actually doing them. The Kiss of Death is such a clutch freestyling move, and it’s definitely not for the faint of heart. To really master this trick, you need core strength and balls-to-the-wall confidence. Take a look:

If the visual isn’t an adequate explanation of this trick’s etymology, then imagine your lips grazing a rapidly rotating tire as you go in for a big ole a smooch!

We applaud people who can do backflips, but I think it goes without saying that FMX riders who can do not one, but two backflips on their DIRT BIKES, of all things, are pretty B.A.

Normally, you need to get some serious air to achieve this trick because the less air you get, the less time you have to complete it and land. Here, Pastrana doesn’t even get that much height, which speaks volumes about his skills.

For this trick, things can get a little sticky no matter how professional your status is. According to PhysicsCentral.com, a front flip is more difficult than a backflip because a “forward flip requires you to lean forward and hunch over the tank, which means you're essentially riding blind as you hope to time things just right.” Plus, backwards rotating flips off a ramp come more naturally.

Why is this trick such a big deal? Years ago, an FMX rider named Bruce Cook botched his landing and became paralyzed, which is an unfortunate reminder of the risks that come with trying to defy gravity.

Backflips are pretty popular with crowds because they’re so difficult, and riders have tweaked them over the years to give them some extra, well, flair. Wanna talk World Best Bike Stunt videos? Check this out:

What’s so special about this particular bike flip? At one point, your hands aren’t even touching the bike. That’s right, while you’re in the air doing a backflip, not only does your body leave the bike, but your hands aren’t touching it either. And, somehow, you’re supposed to end up back on the bike as if you didn’t just pull of one of the best motocross tricks in the sport.

You might just have one after watching this trick unfold. In addition to insane amounts of skill and plenty of calm-cool-and-collectedness, crazy motocross tricks like this one involve faith and a firm grip. Because you’re kind of at the mercy of the bike. Take a look:

Personally, the bike would be torn from my hands due to the force, and I flinch to think about it flying towards the crowd. You really have to have a steel grip to have control over this trick, so mad respect to those who can make it happen.

First thoughts: Why? How?

So, let me get this straight. You do a somersault in the air while your bike is simultaneously doing a somersault? It’s clear this trick was designed for adrenaline junkies and freestylers who are looking for a little more… challenge, shall we say?

You can also sell an ATV fast with RumbleOn!

Sell an ATV online (and other powersports, too!) the easy way with RumbleOn. We guarantee a fast and efficient way to get a free cash offer for your ride. Paperwork? We got it. Pick up? Don’t worry about it! We have you covered whether you’re trying to sell four-wheelers, dirt bikes, or any other vehicle collecting dust in your garage. I couldn’t wait to sell my ATV to RumbleOn and get my best cash offer, and neither should you! Start your free cash offer today.