Military ATV: How Four-Wheelers Are the Military’s Off-Road Option

Military ATVs: Why they're the most practical addition to the Field

When it comes to the Armed Forces, we want them to have  every possible resource to make their job easier and keep them safe. Our military risks their lives every single day so we don’t have to risk ours, and it is our job to continually reiterate how valuable their presence is to this country.

Trade in for an ATV the easy way, get your free cash offer.

Want to trade for an ATV? Trade in or sell a vehicle online, get your cash offer!

Because of that, as a society and government, we try to do everything we possibly can to make sure they’re equipped with all the right tools. While it’s already been a known fact that motorcycles in the military have helped tremendously during times of war, you might be surprised to find that there’s another type of vehicle taking the place of two-wheelers, and for all the best reasons. I’m talking about military ATVs, in all their glory.

ATVs (all-terrain-vehicles) are popular with everyday riders because of their capabilities. The military and Armed Forces also recognize the benefits that these four-wheelers can bring to the field. They add an additional sense of strength to our heroic fighters.

I just learned this recently, and I thought it would be interesting to share. Military ATVs are prevalent in the field, but not quite for the reasons you may expect.

Why are military ATVs becoming so prevalent in most branches of the Armed Forces? It’s because of their adaptability and functions, of course. But one of the most surprising reasons the military enjoys having ATVs is because they’re so easy to destroy, all without feeling hurt in the financial department. Yeah, you heard that right. Military ATVs are compact, off-road vehicles that handle rough terrain better than a two-wheeler, allow for you to carry various items, and yes, are easier to destroy. The destruction of a vehicle is more important than most people would think, but it makes complete sense.

If anyone is involved in a situation where they’re surrounded, and they need to leave the location immediately without taking everything with them, military ATVs are easy to destroy. They need to be destroyed because there needs to be a guarantee that the vehicles aren’t getting into the wrong hands. The last thing wanted is for a capable means of transportation to be practically gifted away in enemy territory.

Polaris has a considerable grasp in the market as one of the most trusted brands for the military to use, and they’ve been selling ATVs since as early as 2004. These vehicles are also easy to transport to different areas when needed, as they’re easy to fit into Boeing V-22s and special operation helicopters. ATVs are notoriously cost-effective, too, so it doesn’t take much justification for the military to buy them in large numbers.

We’ve taken a look at classic military motorcycles before, along with WW2 motorcycles, and they’ve contributed significantly to the fights our country has had to go through. But when a new option allows for quicker transportation, in greater quantity, as well as the ability to justify destruction if artillery or vehicles get into the wrong hands, upgrades are fantastic. These upgrades don't merely enhance look and style. ATV upgrades benefit those currently fighting, improve their chances of finishing their tasks quickly, and offer an improved chance of getting our soldiers back home where they belong. 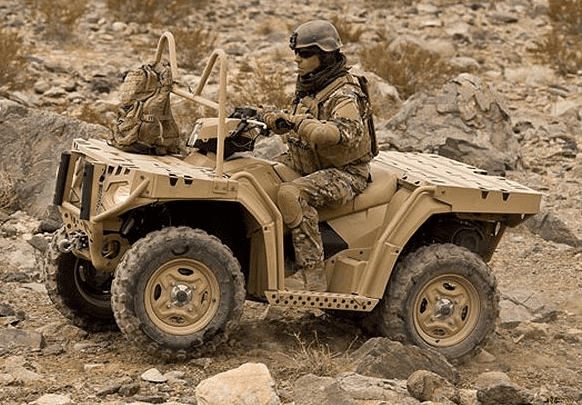 You can be a motorcycle lover and enthusiastic about the sport all you’d like, and there’s nothing wrong with that. It’s RumbleOn we’re talking about, and the love and devotion to motorcycles are very much there. But we’re all about new adventure vehicles coming into the marketplace, especially if they’re helping those who fight for us. These people are heroes, and we firmly believe that everything should be done to make their job that much easier.

Trade in for an ATV the easy way, get your free cash offer.