Why Can't I Sell My ATV Online?

Why is it so hard to sell an ATV online?

“How on earth am I going to sell my ATV online? It’s impossible!”

Let’s face it, selling an ATV is tough enough as it is. Selling it online is an even tougher task. Letting go of your off-roading pride and joy isn’t an easy decision to make to begin with, but finding the right audience to sell to can be even trickier.

It simply isn’t as easy as selling a motorcycle, car or truck. Not everyone may own or ride ATVs, but there are a bunch of them out there. Therein lies the problem of being able to sell an ATV fast: it’s just not that easy.

Step one to sell an ATV: get the right pair of eyes on it.

Facebook is one of the most visited websites on the planet, but is it the right place to post an ATV for sale? Their Marketplace division is full of listings for all sorts of stuff including vehicles. But, considering the wide swath of age groups and demographics, it’s not the best place to try and sell an ATV for cash. Heck, it doesn’t even have to be an ATV. Any sort of off-roading powersport vehicle, including a dirt bike, is difficult. You might be trolled with teenage boys or other kinds of people who will make you think they want your vehicle. There isn’t a worse feeling while selling a vehicle than being played.

Don’t fall into the trap of Craigslist, either. Sure, it’s an attractive option based simply on the fact that it’s free to post something your selling, but it’s a dicey situation. You don’t know who you are communicating with, there are rampant check fraud experiences, and it’s just flat-out dangerous.

You may be expecting too much when trying to sell.

I completely understand how someone can be attached to their ATV. It’s just like being attached to your car, truck, or motorcycle. It makes perfect sense. However, when you’re trying to sell your ATV or dirt bike, those customizations might not mean much to the person buying your ATV. I’ve always been wary of making major customizations on vehicles in the past because I was never sure whether mods would hurt or help me when selling. If I planned on keeping the vehicle, then I would customize all day. No two people are alike and neither are their preferences.

Most sellers assume the more money you pour into an ATV with all the latest bells and whistles will translate to a better return on an ATV investment. Truth is, that’s not always the case and before you know it you’ll end up losing more money than what you took in. The last thing I would want for anyone is to lose money when selling any vehicle let alone an ATV.

Yes, those custom exhaust pipes that make the vehicle roar sure are cool, but will a potential buyer think the same thing? Is a custom paint job really going to matter when you list the ATV for sale? These are just a couple of questions you need to consider before you sell your ATV. Personally, if I plan on selling something down the road, I wouldn’t make any customizations. 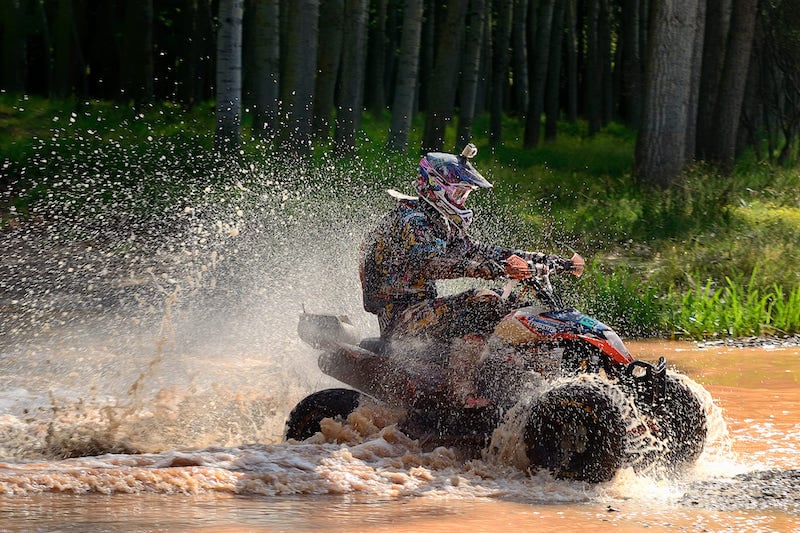 People can be the absolute worst when trying to sell an atv.

I wish I could say (and believe) that every person that walks this planet means well. The unfortunate truth is, most people are going to disappoint you. Yeah, I sound like a negative Nancy, but I’m also a realist. The “bad” people tend to poke their heads out when you’re trying to sell something. You get lowballed or receive the 3rd degree if you so much as sneeze at their offer being too low.

I’ve been there before and it isn’t fun. Nobody wants their hopes to go up only to come crashing back down to earth, and you certainly don’t want your time being wasted. All you want is to sell your ATV.

Take Kelley Blue Book with a grain of salt.

Watch any commercial on TV or listen to any radio advertisement and you’ll hear Kelley Blue Book mentioned at least once. It’s long been regarded as the go-to source for getting the exact value of your vehicle. Unfortunately, what’s never told to you is that these numbers aren’t realistic. You can still use it as a starting point and work your way from there, but don’t stick to it thinking you’ll get exactly what you’re expecting out of your sale.

One thing people tend to overlook is that KBB is expecting your vehicle to be in top condition with no blemishes and problems. You know what you put into your ATV and the amount of blood, sweat, and tears it took to accomplish the feat(s). However, a potential buyer isn’t going to give a flip about any of that. Kelley Blue Book doesn’t know about any of that, and as much as you think a buyer will enjoy hearing that, all they will be thinking about is how much more they will have to spend.

Again, I suggest using KBB as a reference but by no means should you go all-in on what it tells you. Keep your expectations realistic.

The market isn’t working in your favor.

This plays a gigantic part into how much you can receive for your ATV. The market dictates everything. It doesn’t matter whether you’re selling privately or to a dealership, it’s important to know the demand an ATV has. The more demand, the more ROI for you. “But, I bought the best brand, it only has 100 miles on it, and it’s an extremely popular model!” Sorry, buddy. It just doesn’t matter. I’m not saying it’s fair, but it’s how the selling world works. If it was up to me the market wouldn’t matter. Alas, it’s just another pain you have to deal with. Besides the challenge of finding the right buyer for your ATV, half the difficulty lies in whether or not the industry considers your ATV a popular choice.

It may seem a bit overwhelming. I’ve got some good news for you: RumbleOn can help. We’ll take an honest look at your ATV and its history, and will send you a cash offer to buy it within 15 minutes or less. On top of that, we will pick up your old ATV or dirt bike for free.

We can up the ante even more than that. If you’re considering an ATV trade in, we can do that, too! You can trade in an ATV for any vehicle you want. It’s true. We make it easy to trade or sell your ATV, get your no-obligation cash offer and see for yourself!