Winter is Coming! Are You and Your Four-Wheeler Prepared?

Check out these ATV trail riding tips before you tread any snowy landscapes this year.

While there are plenty of things I look forward to during the winter months—spiked eggnog, the smell of burning wood, ABC’s Twenty-Five Days of Christmas—winching my four-wheeler out of an icy rut in below-freezing temperatures isn’t one of them. Still, they’re called all-terrain vehicles for a reason, and if you have no intention of exploring the snowy frontier on one, then what’s the point, really? 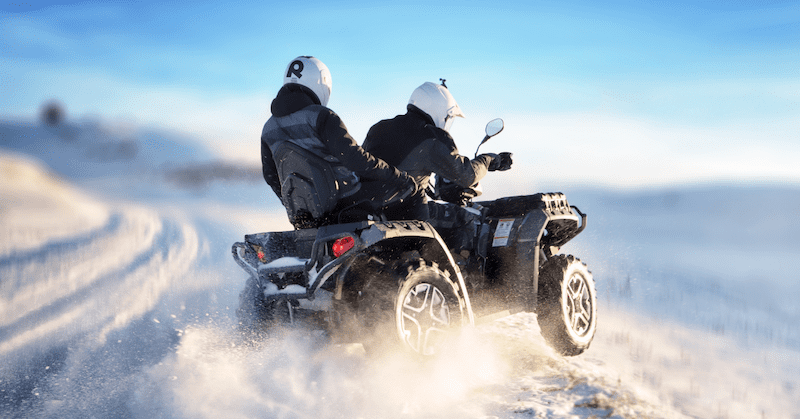 Sell four-wheelers, dirt bikes, and other powersports online to RumbleOn.

If you’ve been thinking, “It’s time to sell my ATV,” you’ve come to the right place. RumbleOn can help you sell an ATV fast for cash, and you’ll never have to leave the couch!

Never carved ice on a quad before? Here’s a list of ATV riding tips for anyone who isn’t afraid of a few frostbitten digits and a couple of chatter-cracked teeth (kidding).

(Note: ATV.com reminds riders to consult their owner’s manual to see if their machines can even withstand frigid temperatures. If not, you’d be wise to learn how to winterize ATVs.)

Invest in warmers and wind protection!

You may think you can do without these, but unless you’re a direct descendant of Jack Frost, I assure you, you won’t last long. Windshields, handguards, and gauntlets are wise investments when you’re riding in snow because they create an additional layer of warmth and protect your face and hands from chilling winds and snow. Additionally, heated grips and seat warmers on sport ATVs create comfortable riding conditions for your hands and hindquarters.

In freezing temperatures, you must dress warmly. Typically, sport and utility ATV riders who play around in the winter months will wear three layers: the first layer is tight and moisture-absorbent; the second layer is looser, thicker, and moisture-wicking; and the third is usually a waterproof jacket-pant set. You should also wear gloves, boots, and wooly socks to protect your extremities, a helmet (of course), and dual-pane goggles to prevent fogging. 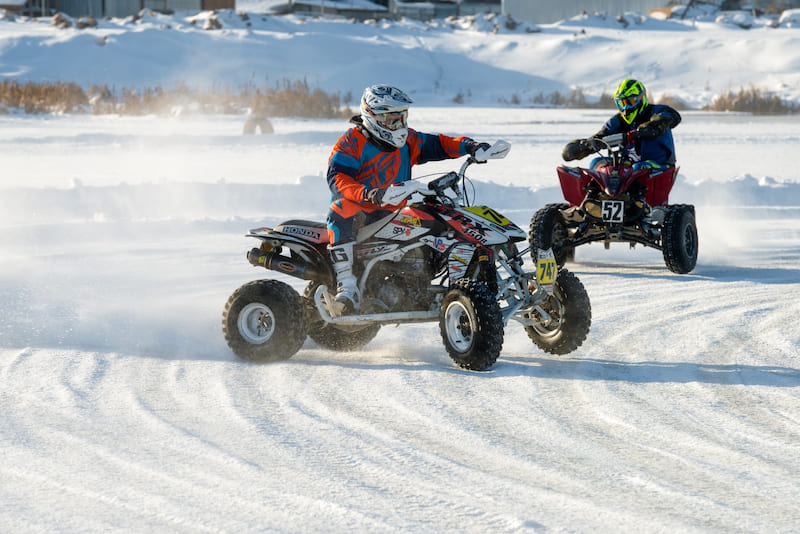 Check the coolant before starting your ATV.

If you check the coolant and it’s frozen, don’t start the engine. Instead, thaw and replace it, because frozen coolant can either ruin parts of the engine entirely or cause it to overheat. If you want to prevent freezing entirely, add an anti-freeze after summer riding; if you’re set on winterizing ATVs instead of riding in the cold, then MotorSport.com suggests you replace the old coolant with fresh anti-freeze before storing it.

Be wary of rock-hard tires.

Eventually, your tires will warm up and start riding normally again, but until then, proceed with caution. According to MotorSport.com, “Tire pressure changes about 1 psi for every 10 degrees in temperature change so keep an eye on the tire pressure, add air as needed but recheck after some time riding to ensure you're not over-pressured since a 3 psi gain is possible.” 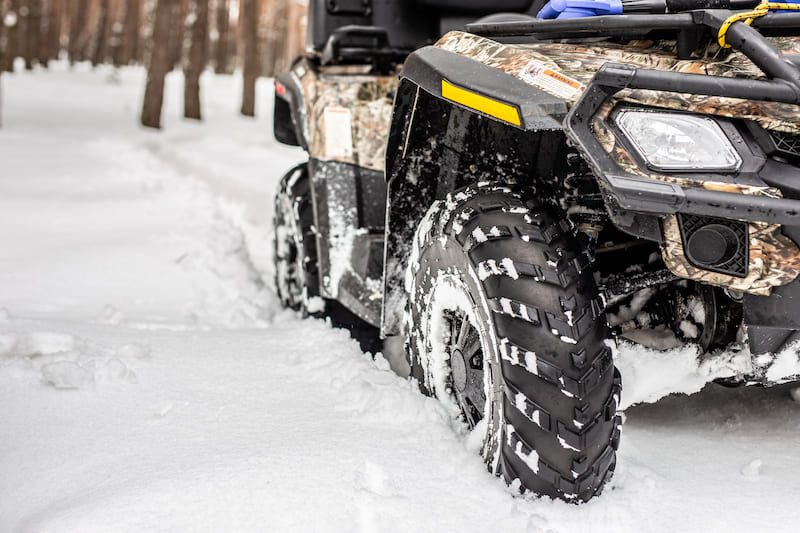 Let the engine’s oil heat up before revving.

For the first few minutes after you start your ATV, keep the rpms low. This will allow the engine oil (which is likely ice-cold at this point) to heat up, as well as prevent engine seizing. Just as you would for your car or truck after periods of inactivity, give your four-wheeler time to liven up!

It’s easy to lose sight of yourself and whereabouts when you’re shredding powder, but one of the biggest ATV trail riding tips I could offer is being cognizant of the marked trail and any posted signage (especially if that signage restricts ATV riding). 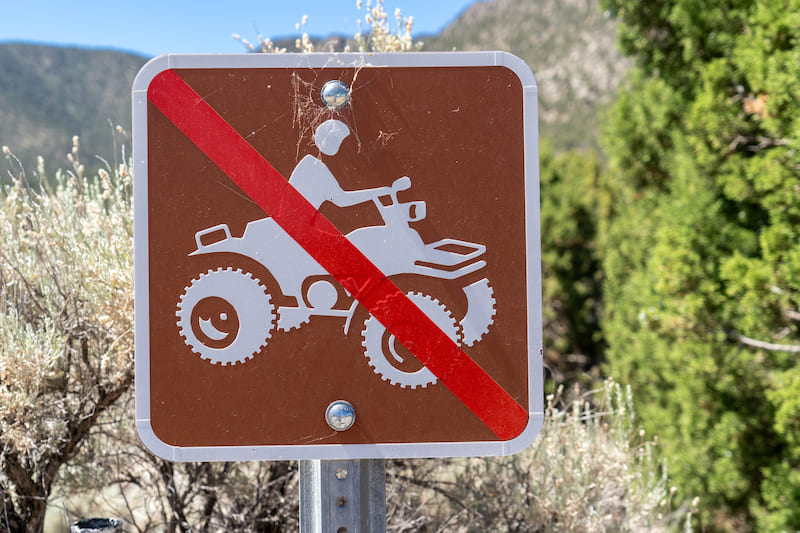 Unless you’re an experienced rider and know what to look out for off the trail, you risk running into large debris (boulders, fallen trees, etc.) that can’t be easily seen beneath the snow. Additionally, riding over any body of water that isn’t frozen over with at least six inches of solid ice, poses safety risks.

Ride with a buddy, and pack the winter essentials.

Anything goes on the trails, even when weather conditions are pleasant. Let’s say your battery dies—which you can avoid by either recharging or replacing it—the last thing you want when it’s freezing outside, and snow is blowing in from every direction, is to be by yourself. So, ride in pairs at the bare minimum; this way, you’ll have a reliable out when things get sticky. And, just in case you get separated from the pack, it would behoove you greatly to pack a few essentials: water, snacks, extra socks and gloves, a first aid kit, a flashlight, and maybe even a few HotHands®, just to name a few!

Can you think of anymore ATV riding tips for winter? Let me know in a comment!

Not ready to brave winter on a four-wheeler? Sell an ATV online right now!

If you have a motorcycle, ATV, or dirt bike collecting dust in your garage this winter, you can get a free cash offer for it from a ready buyer like RumbleOn. We conduct business 100% online, so you’ll never have to set foot in a dealership; in fact, we’ll come straight to you! Choose to sell a dirt bike online to us, and we’ll send a Certified Transporter straight to your doorstep for pick-up, it’s that easy! Want to get a cash offer for your ATV or sell a dirt bike fast? Sell to RumbleOn.